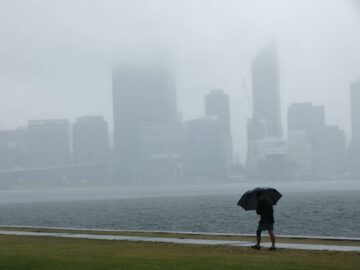 Perth was the coldest capital city this morning, after another very chilly start to the day saw temperatures plunge to 3.3C just after 7.00am.

The first week of winter has seen a string of cool early mornings, with none exceeding 5C in the past five days.

The Bureau of Meteorology said Perth could expect the cold snap to continue as long as the rain stayed away.

“(This weather) is very typical for Perth at this time of year when there is no rain,” a Bureau spokesperson said.

The frosty mornings may be making it hard to get out of bed, but the temperatures are set to pick up in the afternoon over the long weekend.

Temperatures are forecast to reach 18C with the weather partly cloudy on Sunday.

On Monday, for the WA Day public holiday, the forecast is 19C and partly cloudy, and will return to mostly sunny and 20C on Tuesday.

However, the weather will take a turn later in the week, with showers expected to start from Wednesday and continue until at least Saturday.